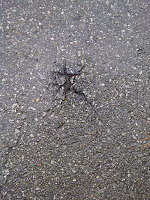 I’ve worked many a job where I’ve had to look in the mirror and question my complicity (however innocent) in my employer’s business practices.  It is not an easy question. Whether I am applying pesticides, encouraging people to buy more or directing a helicopter to land on an alpine meadow (to facilitate a paragliding class)… I've played a part in the earth’s degradation. Then again, just by living a western lifestyle I do the same, but let’s just focus on work for now. Sometimes I did these jobs in order to survive, other times, like the latter, I did so out of ignorance (more the shame as I was the employer!).  I know I am not alone in this but the bottom line is that I cannot shy away from asking, each day, if I am in integrity with myself, my community, and the environment. And, if not, what am I going to do about it?
The following story is an excerpt from my book, Notes from the Bottom of the Box. (The “Big Box” in the story refers to a big box hardware store.) The excerpt is an introduction to the dubious pleasure of asking customers to pay five cents for a plastic carry-out  bag. It is also the prelude to several essays (in my book, that is) on complicity.

For another look at complicit employment/consumerism, go to the latest entry in my other blog The Interdependent Life.

I am often in the lumber yard at the Big Box. I love it there: the physical labour, the view of the North Shore mountains and the dragonflies that dance by in dramatic tango-like pauses. But what really excites me are the trains on the other side of the fence: massive bulwarks of steel and iron driven by stone-faced engineers—indomitable forces impossible to stop even with an abrupt will. Their passionless visages speak volumes: travel at your peril—this track is ours.


But then they do stop. Although it’s a slow glide to zero, the coupler slack rebounds with the archetypical horror of battling titans and havoc-wreaking gods. It is the sound of bridges collapsing: a landslide of heavy metal burying a town of iron. The noise fills the air with echoes that reverberate for miles.


The first time I heard it, I stepped into shock. I actually entertained thoughts that the Iron Workers Memorial Bridge had fallen down as it did once before some six decades prior. But time has made the explosive sound familiar, and now the clamour produces but just a minor thrill up my spine. What once scared me barely makes me jump. I have grown accustomed to the trains’ presence.


I pondered my lack of distress after reading a short interview with George Marshall, author of Don't Even Think About It: Why Our Brains Are Wired to Ignore Climate Change. In it Marshall argues that the reason we treat a threat like ISIS with multinational immediacy and the international calamity of climate change with almost lackadaisical indifference is the nature of the enemy. With ISIS, the combatant is a known group of people who, seemingly, intend harm. With global warming, not only has the “enemy” become like the trains outside the lumberyard—a familiar theme and therefore less scary—but its true nature has been revealed: the enemy called global warming is us.


And therein lies the problem. Do any of us really mean harm when we fill our gas tanks, turn the heat up or use air conditioning? Do we really have nefarious intent when we build our family home and buy cement (a notorious contributor to greenhouse gases) for the foundation or old-growth timber for the frame? Don't we all just want to have a comfortable life?


It is hard to fight an enemy who smiles back at you in the mirror. Or, for that matter, one who stands on the other side of your till. …

Stay tuned for more weekly excerpts from Notes from the Bottom of the Box. If you like this blog, please like me on my Modern-DayRenaissance Woman Facepage.  Thanks for the support!
Posted by Jo-Ann Svensson at 2:23 PM No comments: 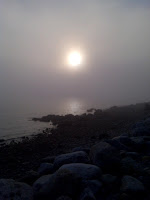 Check out my newest poem, The Antipodal Pilgrim. Click here The Interdependent Life
Posted by Jo-Ann Svensson at 11:31 AM No comments: 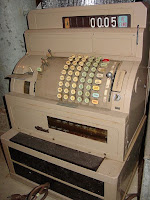 One of my earliest memories is walking to the Super Value on Broadway and Trutch for the “big” shop. Sure there was a Safeway closer to our house but it was a small dingy affair compared to this brightly lit beacon of food delight. Perhaps it was the two looming arches that housed this most modern of shops, or then again, maybe it was its proximity to Peter’s Ice Cream parlour—a sure stop on the way home—but in my mind Super Value was second best only to the Woodward’s food floor, a whole two bus rides away. We were weekly shoppers at Super Value until Safeway picked up its skirts and landed right across the street from our house. Bigger and brighter, Super Value soon lost its shine and Safeway (and the creampuff bakery beside it) became our new destination. It was there that my secret desire to be a cashier grabbed hold of my heart.

The following is an excerpt from the story “On Being a Deli Clerk” in Notes from the Bottom of the Box: The Search for Identity by a Modern-Day Renaissance Woman.

“I should have known the [supermarket]would not be ideal, but I applied for two reasons: one, because they were known to pay union wages and two, because of an age-old girl crush on a supermarket cashier.  Growing up, I lived across the street from the same food store, albeit in a different neighbourhood. This was way before scanners and product codes and many years before self-service checkouts. This was the glamorous era of touch-type cashiers. These women—and they were all women back then—handled the manual key board with incredible dexterity and speed, their nametags proudly proclaiming their prowess: “touch type cashier!” I hero-worshipped these mistresses of the register with their ability to run a constant commentary while adroitly pushing each tab—and push they did, no electric machines back then—with nary a mistake. Verne was my favourite: a tall and shapely, full-figured woman with rhinestone-studded horn rims and Ethel Merman perm. She occasionally hired me as a babysitter, but most importantly, she was the first to get her accreditation as a touch typist. Verne was my hero.

Walking into this store to apply for a job was a bit like walking down memory lane.  Momentarily lost in my girlhood fantasy, I think I was half hoping to see Verne still pegging away at a till. My reverie lasted all of five minutes. The manager took a quick look at my resume and hired me on the spot. The first wounding shot was when he told me I would be working in the deli; the second was when he told me the wage. Minimum? I squeaked with fast-fading optimism. Yep, minimum, he monotoned back, squashing the last of my sopranic hopes. I knew then I should have walked away. I should have thanked him for his time and bade him adieu. But financial desperation overruled my heart-filled dread —I signed on the dotted line.”

Stay tuned for more weekly excerpts from Notes from the Bottom of the Box. If you like this blog, please like me on the MDRW Facepage.  Thanks for the support! 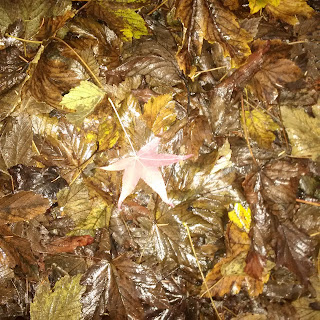 Welcome to The Modern-Day Renaissance Woman blog, aka MDRW! As opposed to my other blogs, Creative Codependence and The Interdependent Life, MDRW will not only celebrate my (soon-to-be) book publishing career but will shamelessly (and endlessly) promote my work.

You have been forewarned.

Besides being the inauguration of my newest blog, October 11 is also the day I submit my manuscript, Notes from the Bottom of the Box: The Search for Identity by a Modern-Day Renaissance Woman, to the first (and hopefully last) literary agent.

So, in honour of my new manuscript, stay tuned for weekly excerpts to entice and entertain. And as publishers like authors to be self-motivated marketing geniuses, be sure to like my FacePage. Uhhh… glowing reviews wouldn’t hurt either.

To begin, may I share my proposed book flap?

Inspired by a three-year sojourn as a big box cashier (hence known as the Big Box), Notes from the Bottom of the Box is a collection of semi-independent stories woven together with the universal themes of identity, self-worth and self-acceptance. A journey through many of my forty plus jobs, this memoir is at times funny, poignant, and soul-searching as I explore the past in an effort to find meaning and value in who I am, and ultimately, who we all are in this interconnected web of life. The book concludes with the discovery that self-worth lies in “being”—not doing—and, on a more humorous note, that finding oneself in mid-life wearing a foolish-looking work uniform is not such a bad plight.

Notes from the Bottom of the Box begins on a whimsical note with the interview process, where perceived identity meets reality—haven’t we all stretched the truth just a little in these impromptu therapy sessions?—and then winds its way through the mean streets of delivery service, the perils of telephone soliciting and the adventure-laced halls of hospital basements. From that inglorious inauguration into the working world, Notes slowly brings the reader into the author’s psyche: What drives these diverse career choices that ping-pong from mountaineering entrepreneurship to working with the street-entrenched; from building an alternative healthcare practice to eventually finding truth at the bottom of a Big Box?

From the carnival-style mirrors encountered in working with the addicted and the mentally ill to the minute conversations stolen over a cash register, this collection of stories and poems finds compassion, laughter and even sorrow, as I share this most-human desire to be seen, heard and loved.

Jo-Ann Svensson
I am a writer, bodymind therapist, salesclerk, medical receptionist, editor, hiker, meditator, daughter, sister, mom, lover of good books, chocolate and wine. I have worked in restaurants and offices, on the streets and in facilities; for all three levels of governments and, most enjoyably, for myself. I am, in short, an MDRW … a Modern-Day Renaissance Woman.